The subject of Tattoos evoke a strong discourse of mixed emotions and feelings. 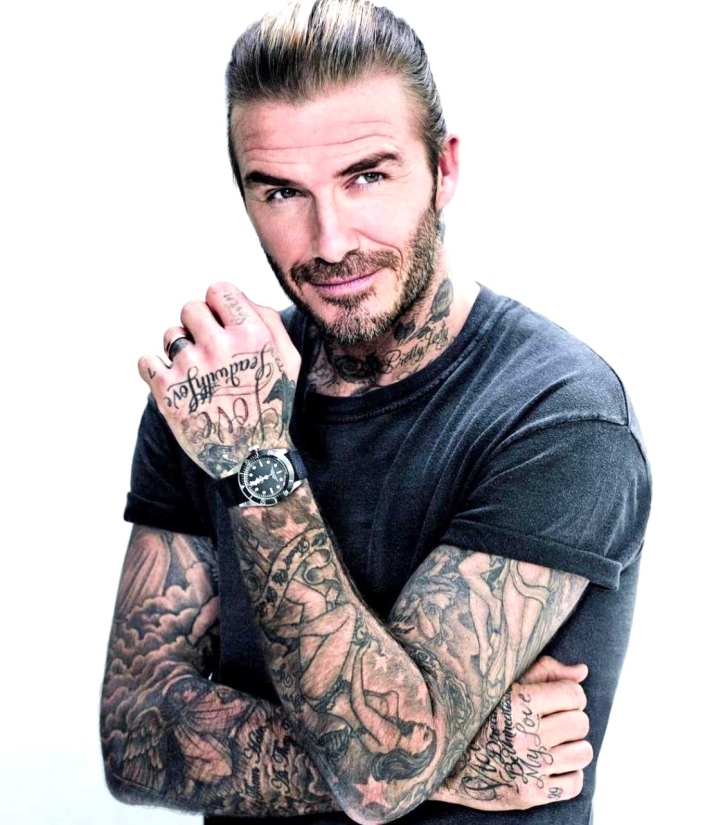 To some, tattoos are simply taboo.

Many are instinctively disapproving – they think it is a mistake and one hears of painful steps take to eradicate old tattoos.

Remove all tattoos please. But I don’t mind keeping the body. 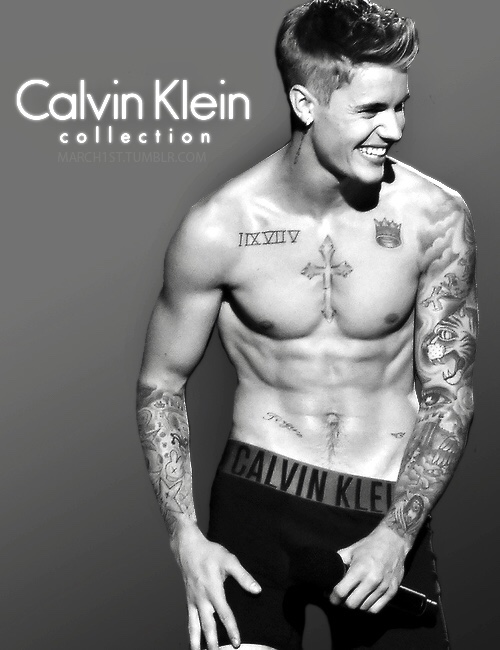 Is it body art ? Self expression? Is it an attention seeking trait? A cry for help – please look at me ?

Ok except for the last one which is a little extreme, I think hand on heart it is a little of all of the above. 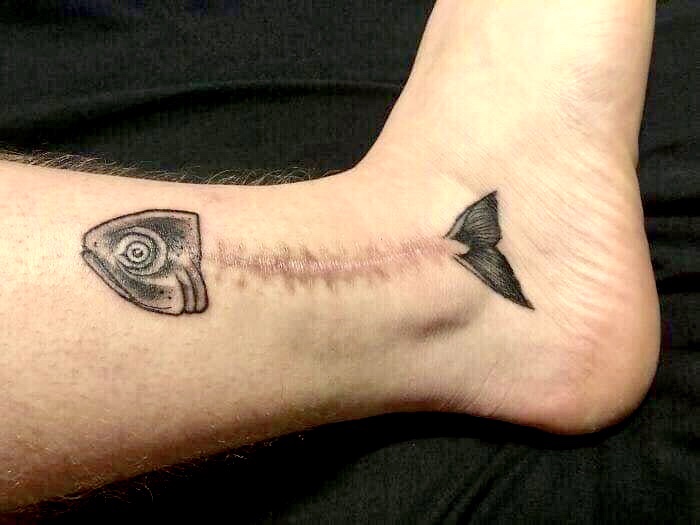 Some tattoos are clever and functional.

Others are downright wacky 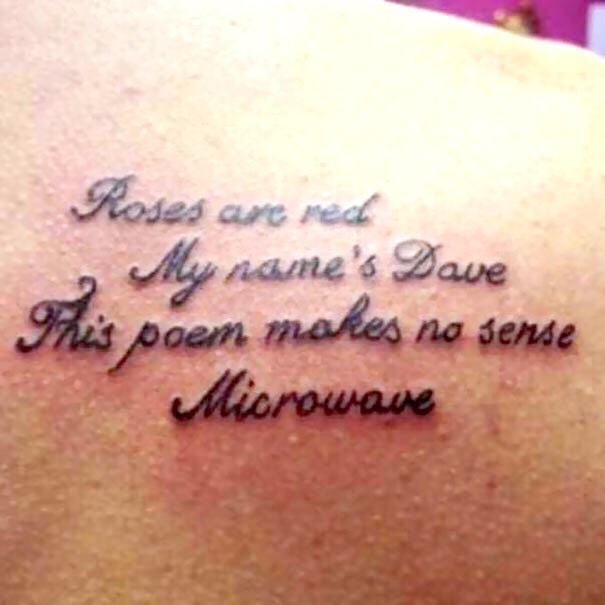 Many expatriates like tattoos of Chinese characters which they find exotic, and filled with a sense of mystique, intrigue and inherent danger.

Well the only inherent danger is that they don’t know what the words mean.

They may think it says something immensely profound like “peace on heaven and earth” but actually it could be just a smart aleck tattoo artist’s grocery list that translates to ” buy soy sauce and 6 cans of Ma Ling luncheon meat”.

And also, the Chinese tattoo is not the only problem the guy above has. I think he really needs to get that third nipple checked out.

Never ever tell your tattoo artist- “tattoo any design you want. Let’s be spontaneous and you tattoo whatever is on your mind.”

He could be a pot head and the only thing on his mind might be:

Never tattoo the name of a woman

Names of women are not a good idea.

What if you break up with them ?

This is a true tragic story.

Someone had snagged the woman of his dreams. Her name was Angela.

He was so grateful she would marry him that in his undying love (and also he thought it would be the most romantic gesture in the world), he tattooed the name “Ansband“on his forearm.

He thought it was really clever and witty.

Three years later she divorced him.

He went back to the tattoo artist to camouflage “Ansband” and transform it into a tribal tattoo.

The tattoo artist, after hearing the tragic story, gave him a 40% discount and transformed it into “wanker” instead.

What about tattoos of your kids ? Well it really depends on how cute your kids are.

And I mean objectively cute. Not cute from the perspective of a doting parent.

A tramp stamp is a tattoo right at the small of a women’s back.

It is a little sensitive and intimate because it is done usually for the benefit of the significant other.

And he sees it usually when he is behind you doing you know what right ?

And particularly when he needs something to read – like the bible ? 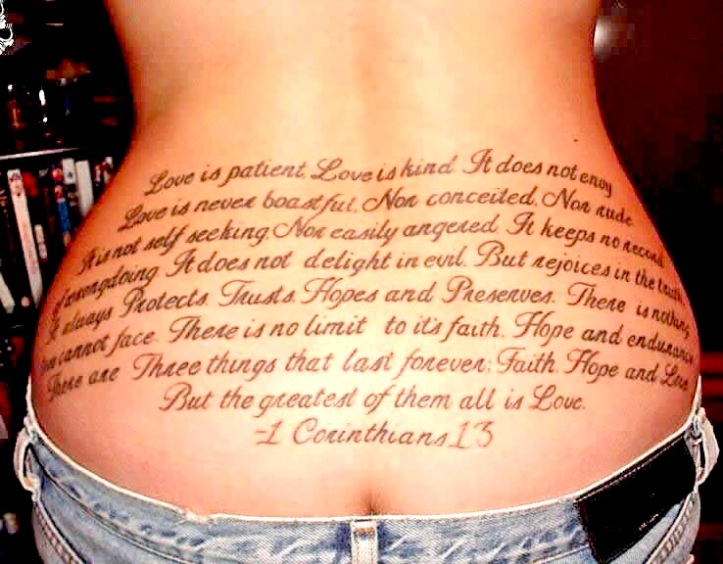 And guys you know tramp stamp are only for ladies right ? 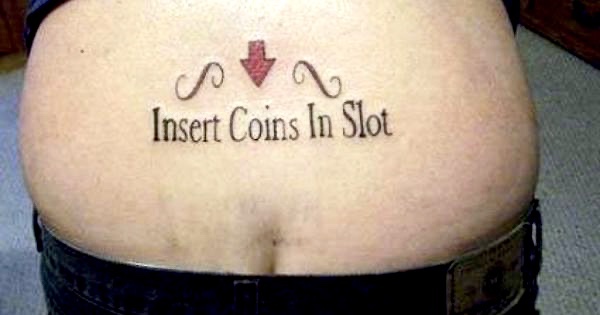 Anything on your back where you can’t see it is a bad idea.

Why you say ? Well you have no way of knowing whether your tattoo artist is any good or following your instructions.

You: I would like to have a ferocious tiger or mystical creature – snarling, primal, evoking a sense of dread and danger.

Be very worried if you see your Tattoo Artist taking sips and you can smell him reeking when he is working on you:

You: I want a beautiful meaningful tattoo of my dear wife and our twins on a sunny day. Please capture their beauty, happiness and the rays of the sun.

About 10 years ago, I made an appointment with Johnny Two Thumbs Tattoo studio.

I had already chosen the design and had faxed it over.

It was to be a praying hands with rosary beads on my Upper Arm. 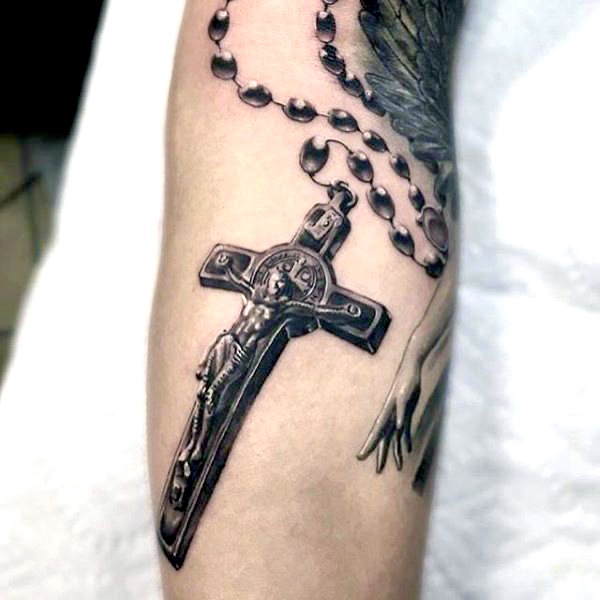 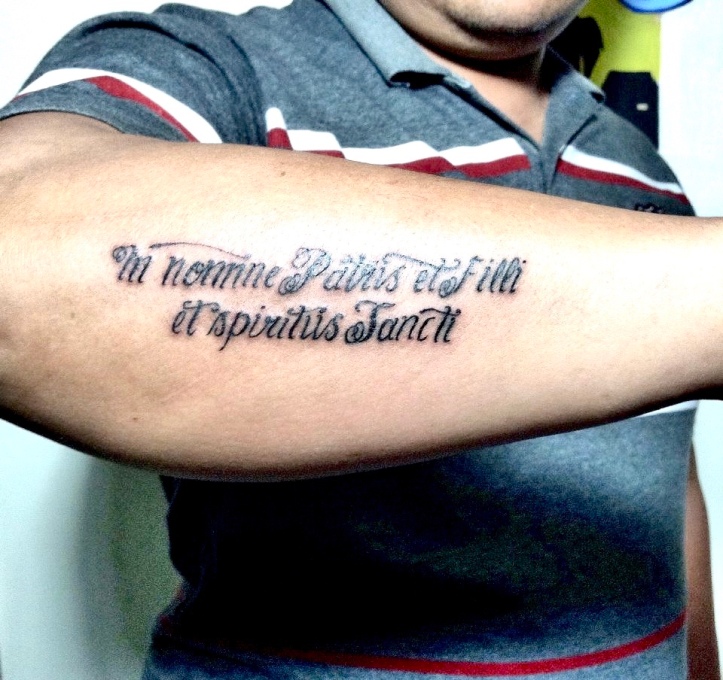 The night before my appointment, I told the family about my tattoo appointment. My youngest daughter then aged about 8 started crying hysterically saying “you will no longer look like daddy”.

It broke my heart and I cancelled my appointment.

Well she’s all grown up now and I have no significant other to consult.

Maybe in the not too distant future, I might ink my right arm.

On my forearm will be the image of a weary lone wolf walking along a solitary road.

Below that will be the Latin words “Eis Quos Amo” meaning “for those that I love “. 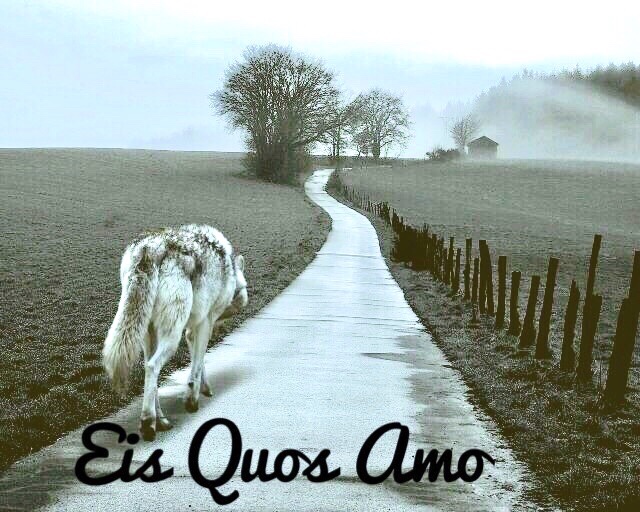 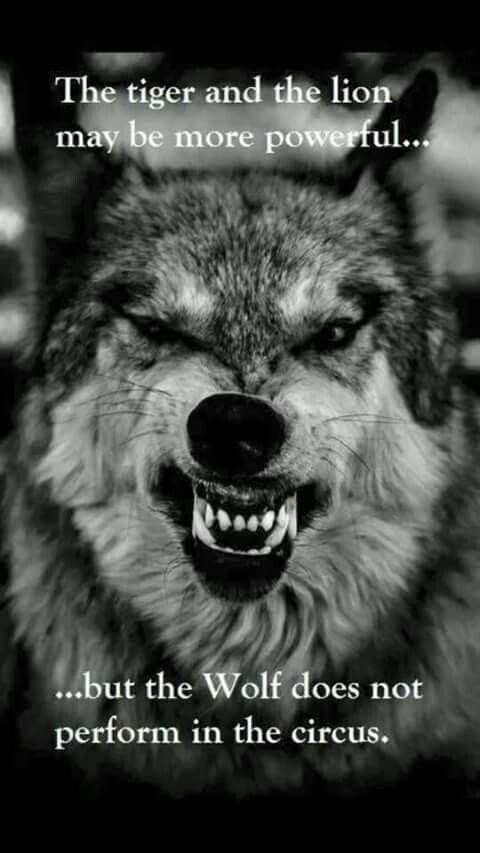 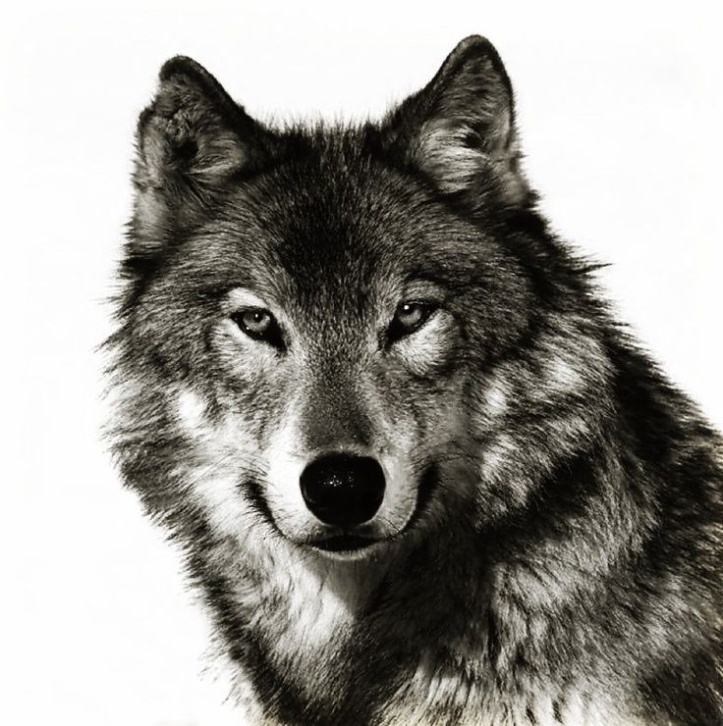 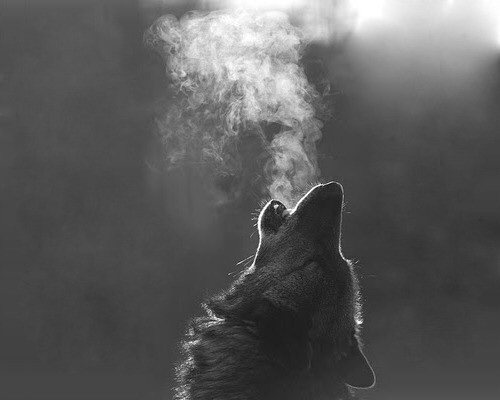 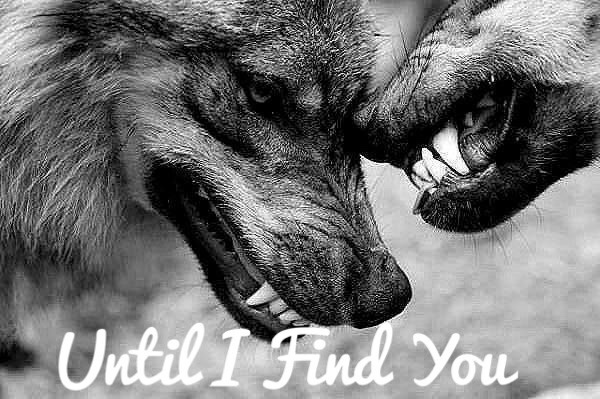 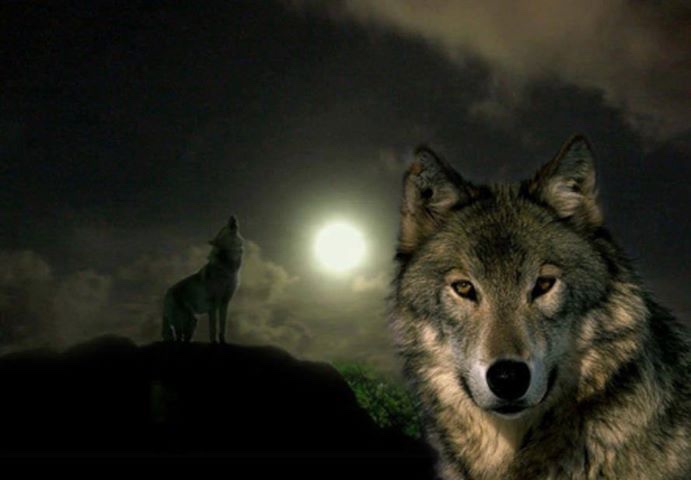 There’s always the other arm .