There are various elements to a perfect Bak Chor Mee.  In no particular order:

QQ is the bounciness associated with fresh handmade fish balls and noodles (The Michelin Guide).  The term QQ originated from Taiwan and its basically the Asian version of Al Dente.  Well cooked but not mushy, it must possess a certain bite.

Note that this term is usually only used in the culinary sense.  It is inappropriate to use it in any other context to denote bounciness. “Howzah will you look at her set of QQ ………..” (hair buns just in case you were wondering) will be highly inappropriate because the average asian will think of fishballs and, more importantly, because this is a family channel and we are sponsored by Pure Wholesome Foods.

For BCM, the good cook will make sure the noodles are properly aired and fluffed (prodding and blowing for 17 hours ) before dramatically putting it into his iron mesh strainer for cooking.  He will use magic chopsticks or a magic stick (properly blessed by his neighbourhood buddhist monk or parish priest) to agitate the noodles while it is in the super hot water threatening to erupt, and he will make a few stylish flicks of his wrist to drain the water, much like a lacrosse (for those aged 21 and above) or Quidditch player (for the Millenials).

Timing is everything.  If you see his lips moving and mumbling, he is probably counting to 8.725  seconds before dislodging the noodles into the bowl.   It is important that you do not talk to him during this process.  If you must, make quiet purring noises or compliment him gently on his rippling arms but do not expect an answer.

A perfect BCM must never have noodles that are clumpy, has varicose veins or cellulite, or look like they have been drowned recently and needed some forensic pathological analysis.  It must look like a wonderbra – soft, sensuous yet springy and promising tantalising good support.  And it must have that bite – playfully and teasingly pulling away from you when you bite down. 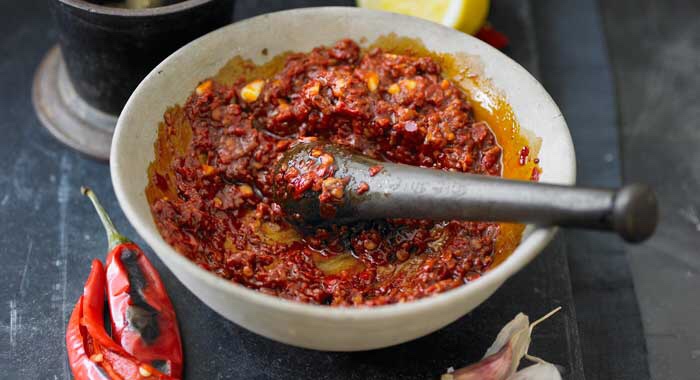 The Perfect Chilli like the The Perfect Storm can send our caucasian friends and some wussy asians to the Perfect lavatory straight away.    But that is a side effect which the brave BCM warrior is perfectly accustomed to, and willing to encounter.

The Chilli can make or break any noodle dish, but particularly so in the case of BCM because of its interaction with the Perfect Vinegar to evolve into  the perfect Ying Yang Cosmo balance (more of this drivel later).

First, the chilli must not have the consistency of diarrhoea.  That comes later after it has been allowed to ferment with one’s gastric juices for an hour or two.

So let’s get our priorities right.

The chilli when ingesting must have a nice color, piquant and lively and one should see some of the lovingly grounded chillies waving shyly at you.  It should be aromatic and taste and feel like it has been lovingly fried by a very fat man for hours, possibly with lard oil.

It must have a little sweetness but not be too sweet – that’s critical because ultra sweet is not sexy.  You want sweet girl next door but yet a certain raw sexuality – like a charlize theron, katherine heigl or scarlett johansson, not a sandra bullock or julia roberts.

The chilli must coat the strands of the the noodles lovingly with a little oil and not have a syrupy, ketchupy clinginess like an ex stalker girlfriend who wouldn’t go away.

A good BCM will always, always have black Vinegar.  Without black vinegar, it is called plain dowdy fishball noodles or chicken rice.

There is not much a good cook can do with the vinegar.  First, he can just buy good quality black vinegar to ensure its providence.  Under no circumstances can he wait for his 17 year old soy sauce to turn bad and pass it off as vinegar.

So if you can, ask your friendly hawker if he is a nice catholic boy.  This will ensure that he doesn’t cheat and cut corners.  Grill him on how often he goes for confession. If he goes almost daily, be alarmed because that might mean he has sinned for each batch of the so called vinegar.

Secondly, it’s the amount of vinegar he puts that requires skill.  The play between the amount of vinegar and chilli is what it takes to achieve the perfect ying yang cosmic balance.  If you see him wearing goggles and using test tubes to measure the vinegar, it will mean the man is serious about his craft and is a irritable testy artisan who deserves respect,  but also a very long queue.

If your BCM makes you shrivel and you need to cross your legs desperately, there is too much vinegar.  If there is no sourishness whatsoever, you have joined the wrong queue and you are tasting fish porridge. 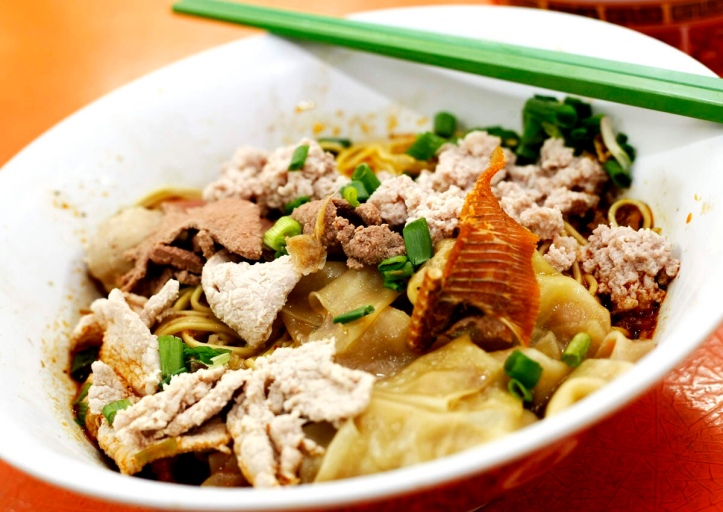 Legend has it that during the Ching Dynasty, the Emperor’s Chef accidentally stepped on the Emperor’s Garoupa fish and in a moment of panic, fibbed that he found this delicious breed of fish called Sole (of his feet).

His descendants have continued this lie to this day hence perpetuating this expensive item sold in good quality dry goods store.

These ingredients are essential to a good BCM and if any of them are missing, then you should throw a hissy fit and ask for a refund.

I often worry that when people read this blog, they expect a high level of cerebral rational intelligence and may run amok when they realise increasingly that it consists largely of garbage and sick innuendos.

So I try to put in big words and useful information to break the monotony.

So the educational word of the day is “fili fala”meaning a non essential, much like the 2000 “extras” in any good Hollywood movie set waiting to play man number 189 walking across the road before the bomb goes off.

Fili Fala could also refer to the girl you intend to flirt outrageously with and hopefully have amorous sex with soon, the so called “Miss Right now” while waiting for “Miss Right”.

In the context of BCM, in stark contrast to the essentials, fili falas would refer to any unnecessary or random ingredient like vegetables, fish dumpling, fish ball or cakes, Alaskan albino left handed crab or Mozambique red lobsters.

In Singapore, if you want to open a BCM stall, the name is important. You need to call it “Ah Hoe” or “Ah Kow” or “Ah Guan” to have authenticity and local gravitas.

I suspect many stalls have already passed hands down from 17 generations and the present owner is likely to be some trendy millennial working as a successful investment banker in Goldman’s Sac with a pronounced American accent. His name is probably Trendon Hemsley Choy but Helmsley Bak Chor Mee will probably not do the trick so “Ah Choy Bak Chor Mee” it is.

Helmsley, in his infinite wisdom and his grammable lifestyle, will probably hire a good morning singlet wearing Ah Pek to cook and man his stall.

My makan kaki peeps and I went down this morning to a Coffee shop at the junction of Verdun Road and Kitchener Road where Ah Ho was located. I was told they have been around for many years but was previously located in a Coffeeshop just a stone’s throw away at this old location: 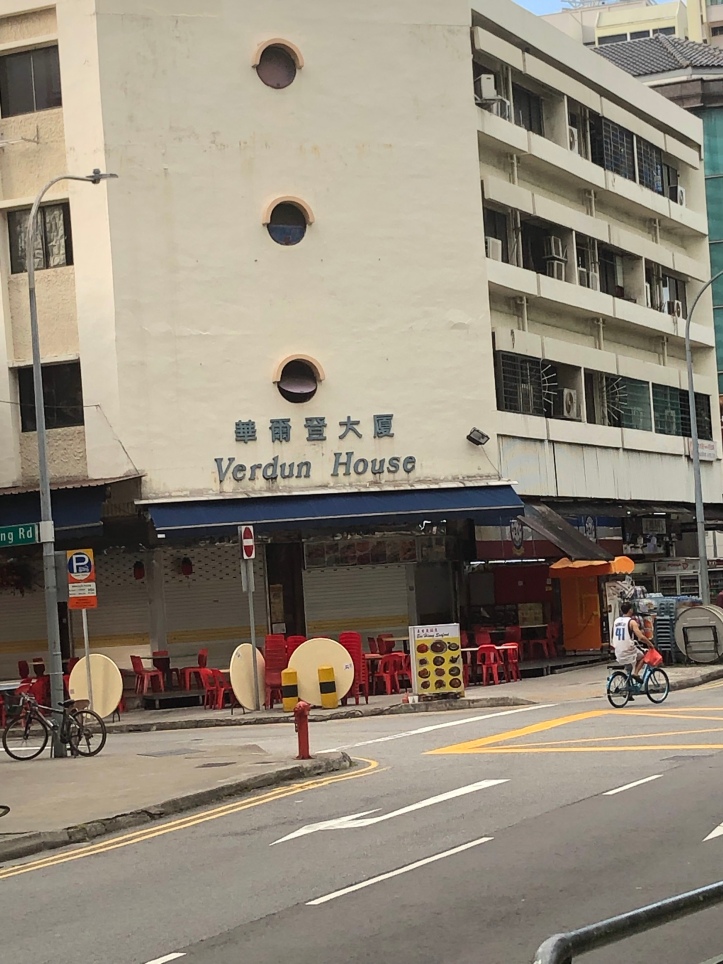 This is really the end of Sam Leong road and if you took a right it will be Verdun road . They have now moved to the Coffee shop diagonally across where Verdun Road meets Kitchener Road barely 10 metres away.

From the location above , you will actually see a small open air car park straight ahead and you should park there. The Ah Ho Coffeeshop is right next to the car park. 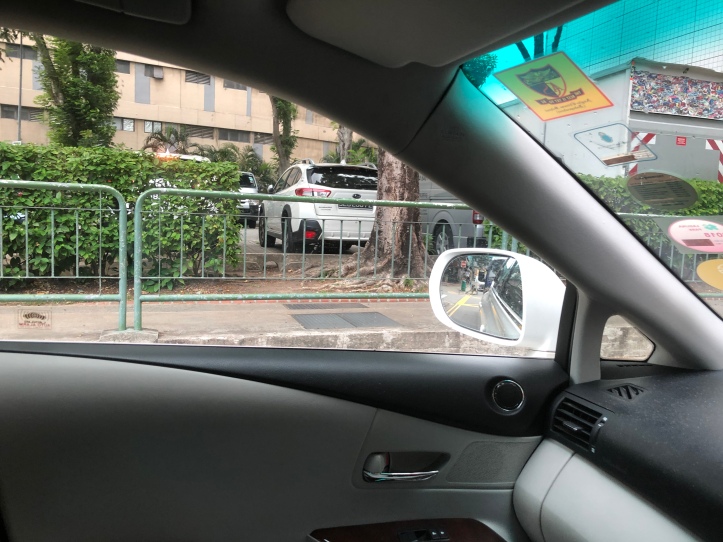 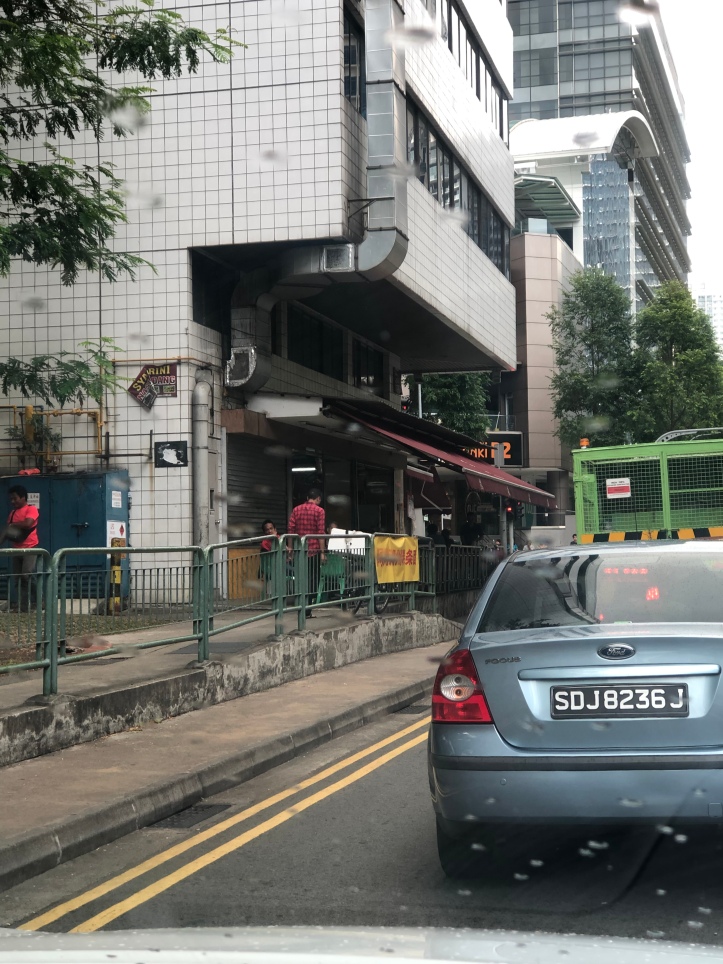 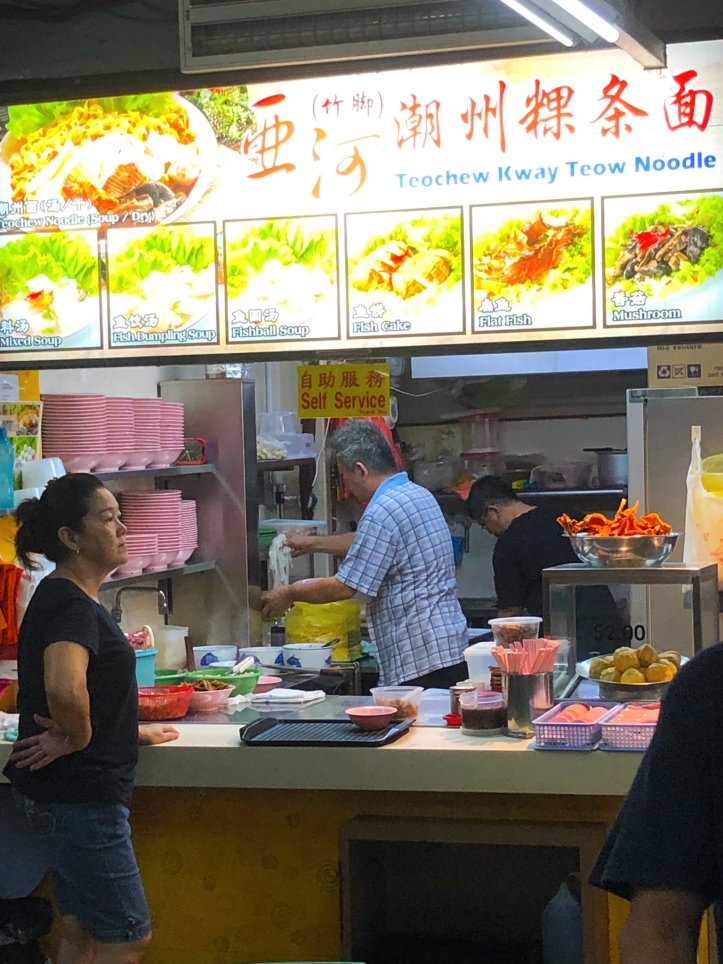 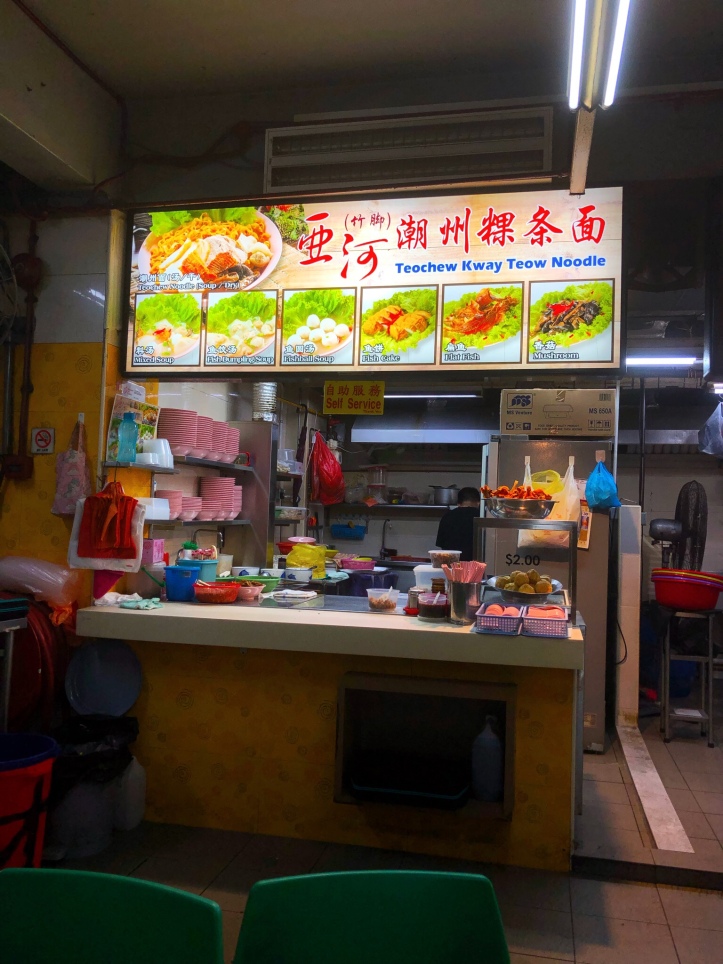 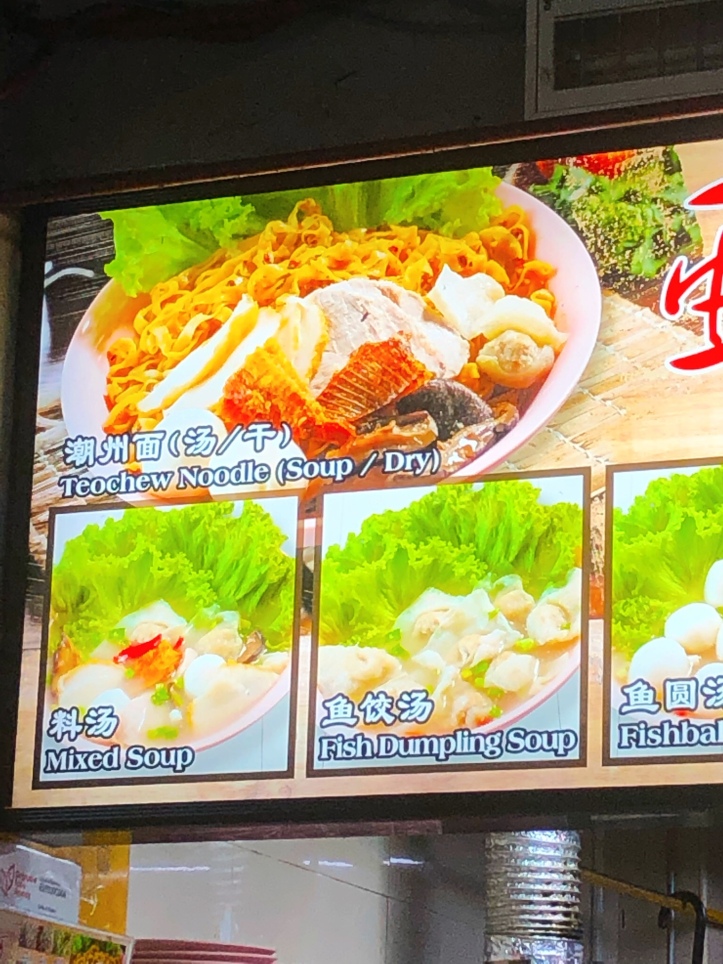 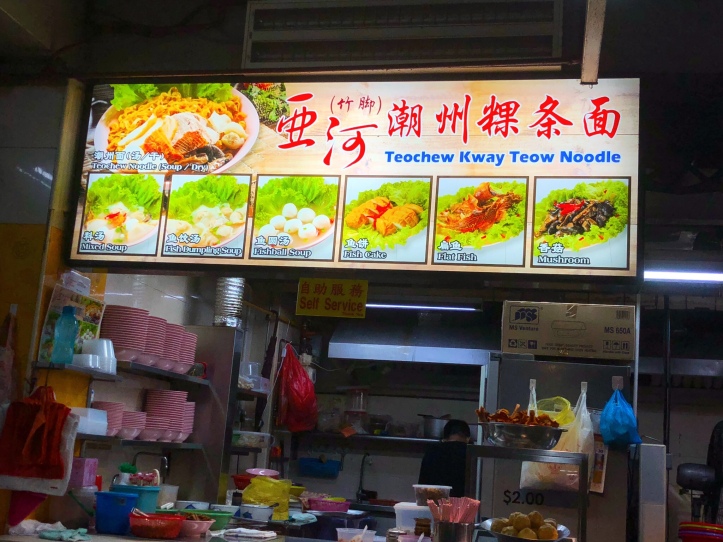 And how was the BCM at Ah Ho ? Very good indeed. 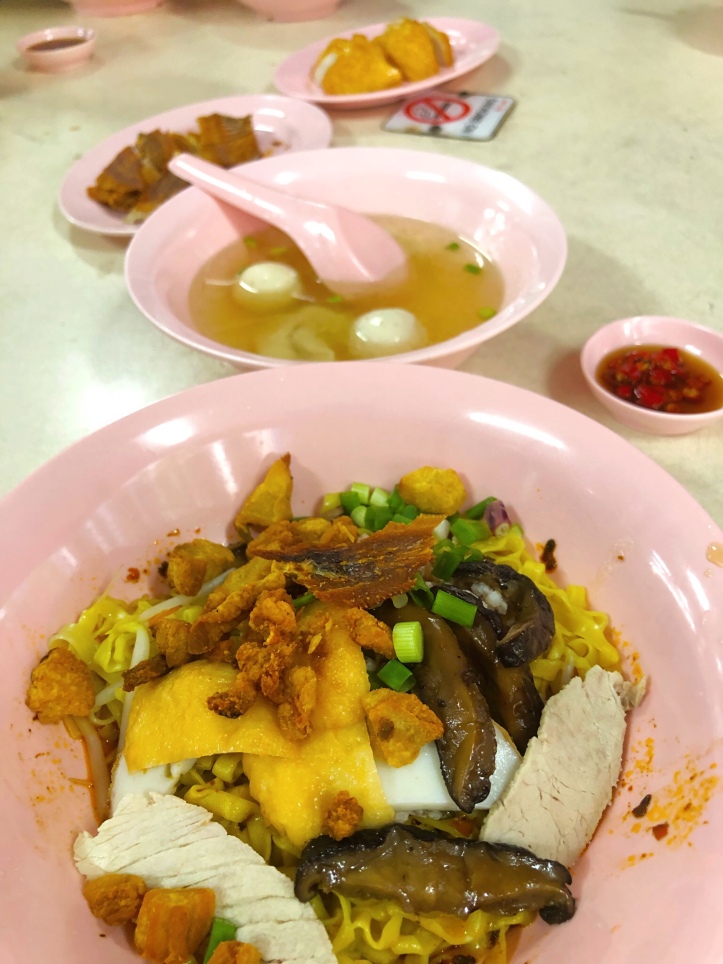 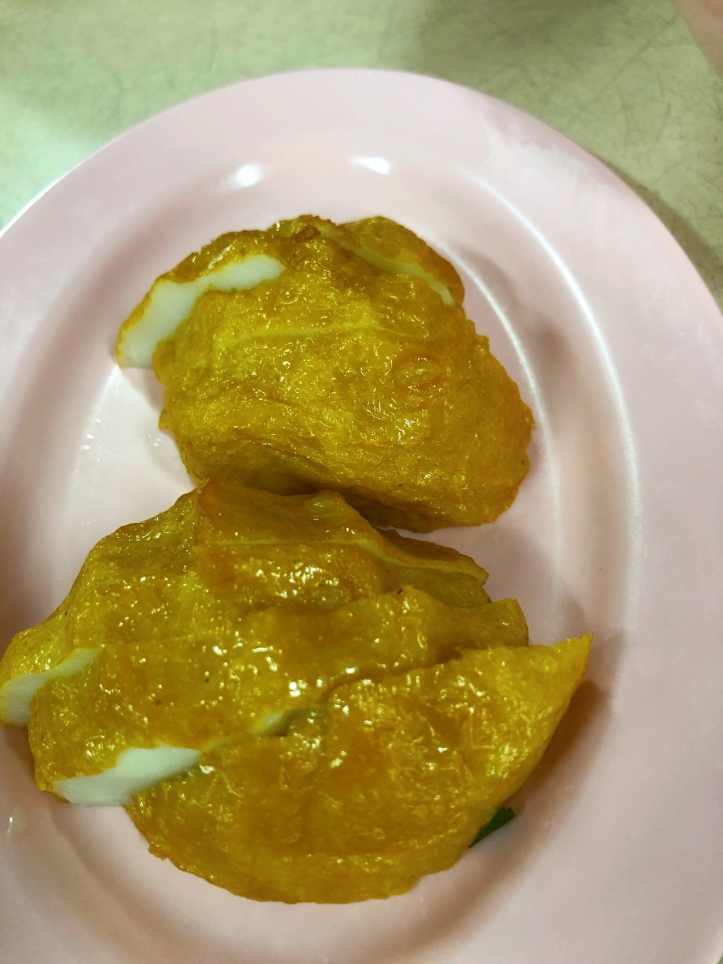 The noodles were done QQ just right and the Chilli was the Bomb .

Vinegar Ying Yang balance was perfect and all the essential ingredients were there.

If I had to be critical, the fish dumpling was meh and the fish balls were meh-er. But they were fili falas and could be overlooked.

Ah Ho would definitely be my favourite fix for BCM if I didn’t want to travel to Clementi West or Jurong for my fix, or face the laborious queues at Crawford Lane.